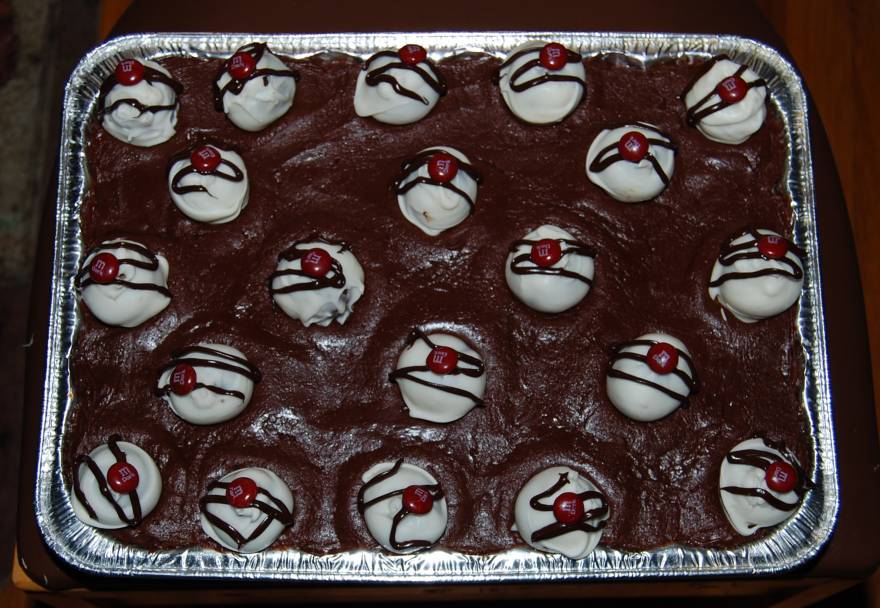 While the cake cooled to frost, I took the small cake, used my wonderful chopper to turn it into crumbs (I love that chopper!) then added some toasted coconut and chopped that into the crumbs. Once that was mixed, I added enough of the cream cheese frosting I made (it was the Martha Stewart recipe Jenn told me about -- thanks, Jenn!) to keep the crumbs together, formed that into balls for the pops and put them in the freezer to harden. I put together a table while I waited for everything to cool and chill. Then, I took some of the cream cheese frosting and did a thin layer on top of the chocolate-caramel-chocolate soaked cake. Once that was done, I warmed my chocolate marshmallow frosting (came with the Heavenly Candy Bar Cake recipe) and spread it over the cream-cheese frosting. Once that was done, I went and retrieved the cupcake pop balls, melted some white candy melts and dipped the pop-balls. When that was done, I melted some dark chocolate and decorated the candy-coated pops. Then I took some dark chocolate M&Ms and put them on the top of the candy-coated pops. I decorated the top of the cake with the cupcake pops. I don't think I missed anything except peanut butter and I considered adding that in some way but gave up on that idea. It's as stuffed as I can manage. I think it weights 5#. LOL

Oh Man! That is truly a stuffed cake. Sounds like a lot of work.

I think this might be illegal to serve to teenagers...in some states anyway...

It was roughly 6 hours. I started around 2:30 and finished around 8:30. I wasn't working on the cake the entire time (building a table and checking out Humzoo between tasks) but it was ongoing most of that time. How do you put a price on 6 hours of labor? No one asked me to invest all that time and do all those parts--it was my choice. Just wanted it to "snap".

Hopefully they will enjoy all the parts and it will be fun for them. They will probably not appreciate all the effort and attention to detail but if they have fun with it--that's the whole point.

Like my library workers who wave and smile at me from the workroom now when they see me at the counter. They may not appreciate all the effort to make it "just so" for them but their smiles and joy is what it is all about and worth the effort (in my book). Like any other creative project--you do it for the pleasure and fun of the recipients.

Can I come over for a bite of that? Wow, that looks so yummy!

Thanks for the cupcake pops idea, Jenn! They really make it look different. I was clueless about decorations until I saw your pops!

Jenn, I don't know if you got the kind of enthusiasm over these pops that I got from a co-worker but they seriously made a big hit. She talked about them for 2 days. We are going to try yellow cake with chocolate marshmallow frosting next and dip them in dark chocolate and maybe add a swirl of white. I need to go find some sticks to make them into real pops this time but they were a big hit. I know folks here thought they looked labor intensive but you could do a cake mix and canned frosting (though it wouldn't be as good in my opinion) and freeze them and dip another day and they would be good for a party or fun pop bouquet for someone. Really thank you again for sharing this one. I think it will be on my keeper list and requested over and over. The possibilities of combinations is endless!!