In July-August when I was silver salmon fishing in Alaska we noticed an orange "scum" on the water. No one knew what it was. I was fortunate to be there at the right time and took photographs of it and wrote a blog about it because it had made the national news. http://www.humzoo.com/stevenheinzel/blog/100/ 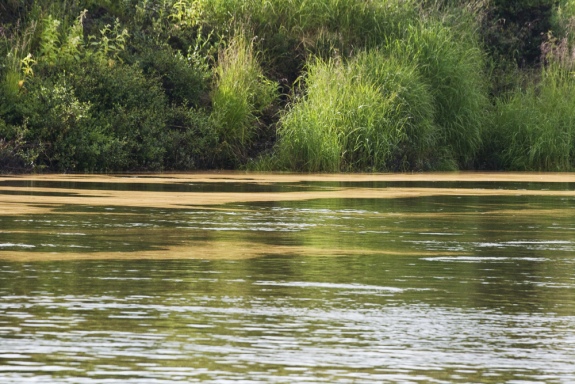 The best scientists were able to come up with was that it was non alien and non toxic. They speculated that most likely it was spores from a type of fungus called rust. But the mystery still remained because scientists were not able to positively identify the exact species of the rust fungus - until now. It is It is the Spruce-Labrador Tea Needle Rust, Chrysomyxa ledicola, a parasite of both spruce trees and a rhododendron a flowering woody shrub common to conifer understories the world over called Labrador Tea. (http://news.yahoo.com/alaska-orange-goo-mystery-solved-065801406.html)

Darn, I was holding out hope for aliens.

I agree. I was hoping for aliens, too.