The Case of The Blue Pillbug

Returning to the rear door of my garage after photographing insects in my backyard I spotted a pillbug on the bricks outside the door. Spotting pillbugs is nothing new, they are all over the place. Anyplace that is dark and damp will have its share of roly polies, as they are sometimes called. There was something quite unusual about this pillbug, however, it was blue!!! Not just a hint of blue if you looked at it just right, but a solid shade of blue as you can see in the photo below. 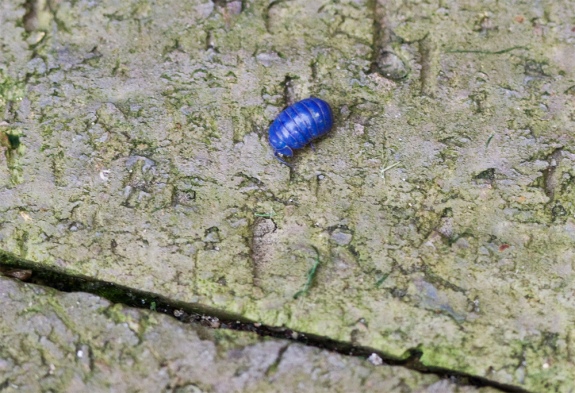 I had photographed pillbugs before but knew very little about them. I knew they were not insects but were crustaceans, I knew they rolled up into little balls when frightened and I knew they liked dark damp environments. With so little knowledge about this species I knew there was no way to determine why this guy was blue unless I found the answer on the web - and I did. 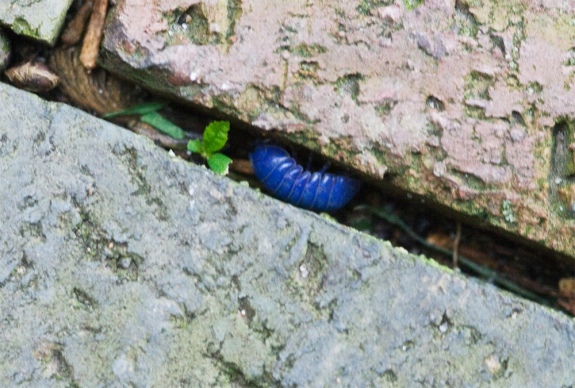 Debbie Hadley wrote an article titled "10 Cool Facts About Pillbugs" (http://insects.about.com/od/isopods/a/10-facts-pillbugs.htm). I was not aware of most of these facts before reading her article:
1. Pillbugs are crustaceans, not insects. (I knew this one)
2. Pillbugs breathe through gills.
3. A juvenile pillbug molts in two sections.
4. Pillbug mothers carry their eggs in a pouch.
5. Pillbugs don't urinate. (now I don't have to worry about them peeing all over my bricks!) 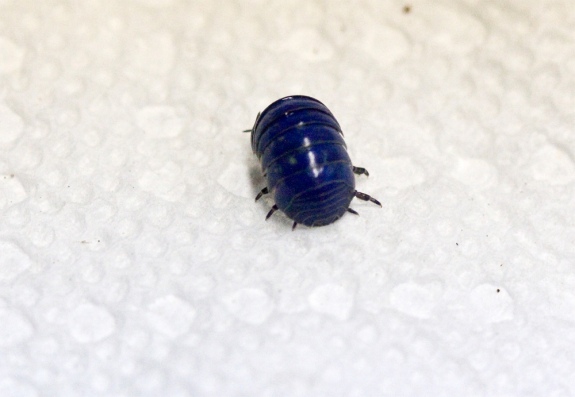 6. A pillbug can drink with its anus. (I knew some college fraternity guys like that!!!)
7. Pillbugs curl into tight balls when threatened. (I knew this one, also)
8. Pillbugs eat their own poop. (I wish politicians practiced this instead of just dishing it out!)
9. Sick pillbugs turn bright blue. (explains why my little guy was blue - he has a viral infection, iridovirus, which causes reflected light to be blue)
10. A pillbug's blood is blue because they have hemocyanin in their blood instead of hemoglobin. (that would do it!!!)

Poor little fella. I hope he gets better. Maybe Grandma needs to make some noodle soup.

Interesting but hope he recovers.

Sounds like Nancy feels the need to assist. I tend to be blue when I'm sick but it usually isn't as obvious! Fascinating facts!!

That is so fascinating!! Thanks for posting.

girlcarew   Tuesday, June 21, 2011
I certainly thought I had a rare and wonderful pillbug when I discovered a beautiful blue one under some firewood. I ran to get my camera to capture the image, but by the time I returned it had vanished. Glad to know the reason for the unusual color, yet had hoped for a far more positive cause.

teed   Saturday, October 8, 2011
in class I new when pill bugs were blue they were sick and I am 7 years old

makari martens   Saturday, January 21, 2012
How often do pill bugs get sick? How do you cure a pill bug? Please someone respond! I HAVE PET ROLLIE POLLIES I NEED TO KNOW

Sorry, but from what I understand you can't cure a "blue" pill bug. Here is a site with some interesting facts about pill bugs that may be helpful.
http://insects.about.com/od/isopods/a/10-facts-pillbugs...

stheinz   Thursday, November 8, 2012
I love pill bugs, I did a project on them. They can be healed by rubbing something rubber, or the bottom of a shoe to it. the rubber replaces the sick cells. Good luck!!!!!!!!

Pillbug fan   Thursday, April 11, 2013
Well hmm cus me and my friend at my school mke roly poly farms and just a couple days ago we found a 1 inch long one that was as blue a the sky. Is there a reason for the size Cus all the other normal ones we found were tiny is there a reason for its size???

I have seen non-blue ones before that seemed to be giants. I have no idea why their size is so much bigger than a "normal' bug.

stheinz   Saturday, April 20, 2013
I found a blue one in my back yard,and it was really tiny.Is there a reason?
I am 8 years of age. Tootleoo! Bye! Bonjeure!Aloha! Gazuntite![If you sneeze!]

I read that they turn blue because of a viral infection.

JoJo McGillicutty   Monday, May 27, 2013
Did the pill bug sneeze when it had a viral infection?

Cutekitten132   Friday, November 8, 2013
The blue pillbugs are hosts of a parasite, which my Dad discovered. Wondering about the unusual blue color, he dissected many that he ran across at the San Diego Zoo, where he was the senior pathologist, in the late 1970's to the mid 1980's. He discovered that all the blue pillbugs were infected with a previously unknown mermithid nematode, which was then given the identification of "Thaumamermis Cosgrovei". And now you know.

MiraKat   Sunday, March 29, 2015
By the way the one that says Mira is suppose to Mirakat

I have not seen any others that are blue.

stheinz   Friday, May 27, 2016
I play with these things all the time!
Never seen a blue one. I guess ones in my area are healthy.
Ive heard of feeling blue when your sick, but this gives a whole new meaning!