Here is the swing that I wanted: 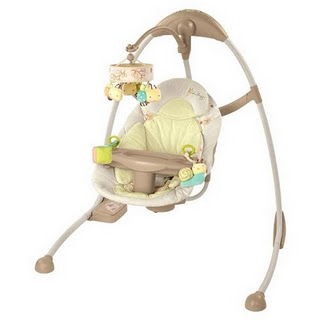 First of all, I didn't realize how stressful it would be to pick out baby gear! There are literally hundreds of choices and everyone has their opinion on what is best! I didn't really want to spend a lot of money on a swing because Brayden isn't even here yet and I have no idea if he will even like the swing. My luck, I would spend $100+ and he would hate the swing and scream the entire time! So, I was really torn on whether or not I even needed a swing. So, I decided to look on Craigslist to see what was available. And let me just say...

We have gotten a lot of things for Brayden off of Craigslist - including the crib, changing table, glider and ottoman, and high chair. I really have no problem getting used things, we have saved a ton of money by getting things off of Craigslist and from consignment sales.

I ended up finding a Graco swing on Craigslist for $55.00! It was in wonderful condition! You really couldn't even tell that it had been used. I am not 100% in love with the pattern (called Deco) but I am sure I will survive! The swing isn't a cradle swing - meaning it only swings head to toe, instead of side to side - but it is A LOT smaller than the cradle swing we looked at, and hopefully Brayden won't care! Plus, I saved a lot of money and I won't feel as guilty if he hates the swing!

Here is the "new to us" swing from Craigslist: 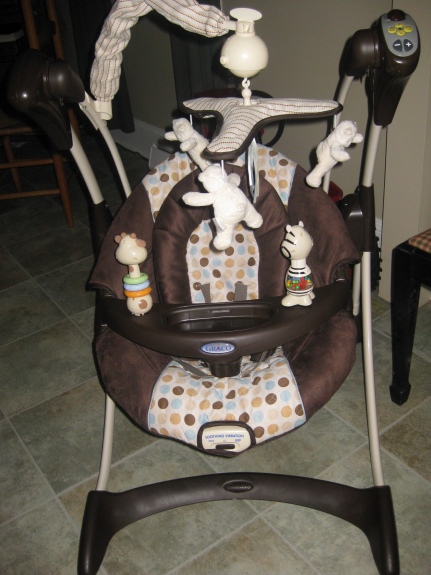 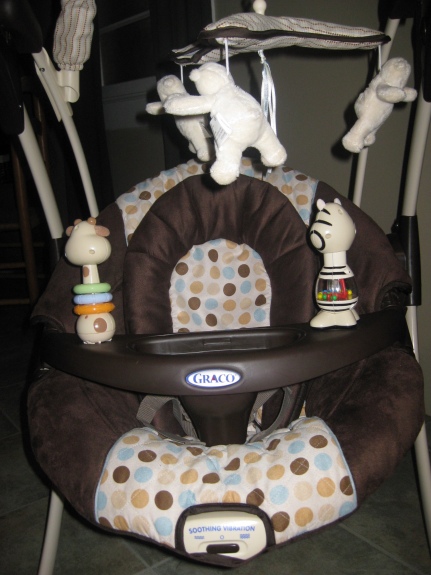 I like it! Good find! Our Craigslist options aren't so great, people refuse to post photos and I refuse to make a trip for something I can't preview. Thankfully our parents are so excited about this baby we've put out very little, if no money at all. :) I'm glad to hear you're having such good luck with Craigslist!!! I also hate paying full price. :)

I love Craigslist, but actually do the sort for ads w/photos only - no photo, no sale for me. Oh, and I never pay full price. For anything. Yes, I'm cheap. :O)

we use our swing like this all the time. it is big too, but all this baby crap is big and takes up lots of space! good job on finding it on craigslist. i have to say i have bought a lot of stuff on craigslist, high end stuff that would have cost a lot of money had i bought it new!

Good job. June's only Christmas present this year from Santa was a toy from a consignment store. The swing we had was really old and given to us by some neighbors before Dylan was born. It was a Graco from like 10 years ago. It did not do anything fancy, but it did a good job for both kids and then we gave it to our friends. You won't use it forever anyway!